What the hell's a Piraqua anyway?

Ever since the episode of Black Sails where the Character Jack Rackham mentioned the word Piragua, I've been searching for a way to make one of these for FFOS a playable ship. After a little time looking around on the web and the release of a dug-out style boat by Firelock Games I decided to indulge in a little project.
Blood & Plunder by Firelock Games has some handsome and quality products for starters. I purchased around a dozen of their ships and over time I will be posting some of their models with a little of my own modification, alterations, and hybrid hulls. This is the basic kit for a Piragua: 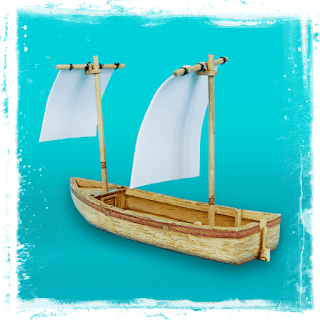 (photo used without permission of Firelock Games)
A neat little kit but something about the style of sail bothered me. Then I got to thinking about my inspiration to FFOS, Sid Miere's Pirates.It had a huge impact on my creation of our convention game and I really liked his war canoe image design shown here: 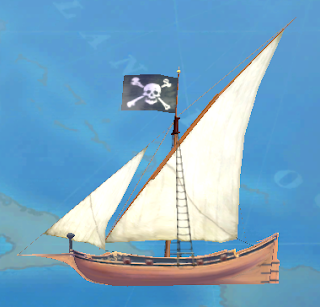 (photo used without permission of Fraxis Games)
Combining the two resulted in this: 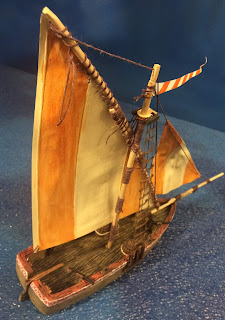 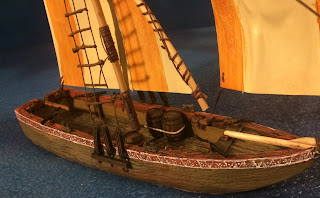 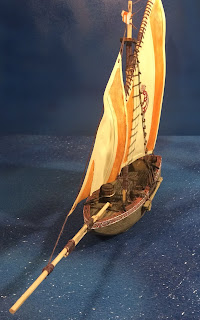 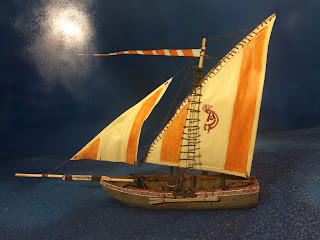 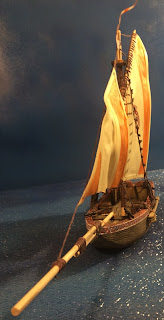 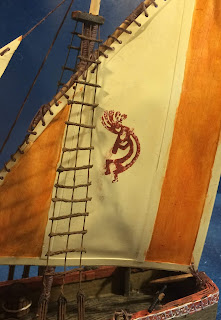 (yes I know this is an Image of Kokopelli from the pueblo peoples of  the Precolumbian desert South-West. But I liked it and I had an ink stamp that made the Image easy to apply.)
There are a bunch of after market parts from Old Glory 25 and hand made additions to the model. Oars, oar-locks, pulleys...
No convention going scalawag playing Fist Full of Seamen would ever consider this as a prize vessel. It's actually a problem with most of the ships from Firelock Games, most are tragically under gunned for our games. To remedy this for the Piragua I will be allowing the captain of this vessel to play three of these ships in a small flotilla to make them more inviting and raise the survival rate.

Posted by Caveat Huckster at 10:18 PM